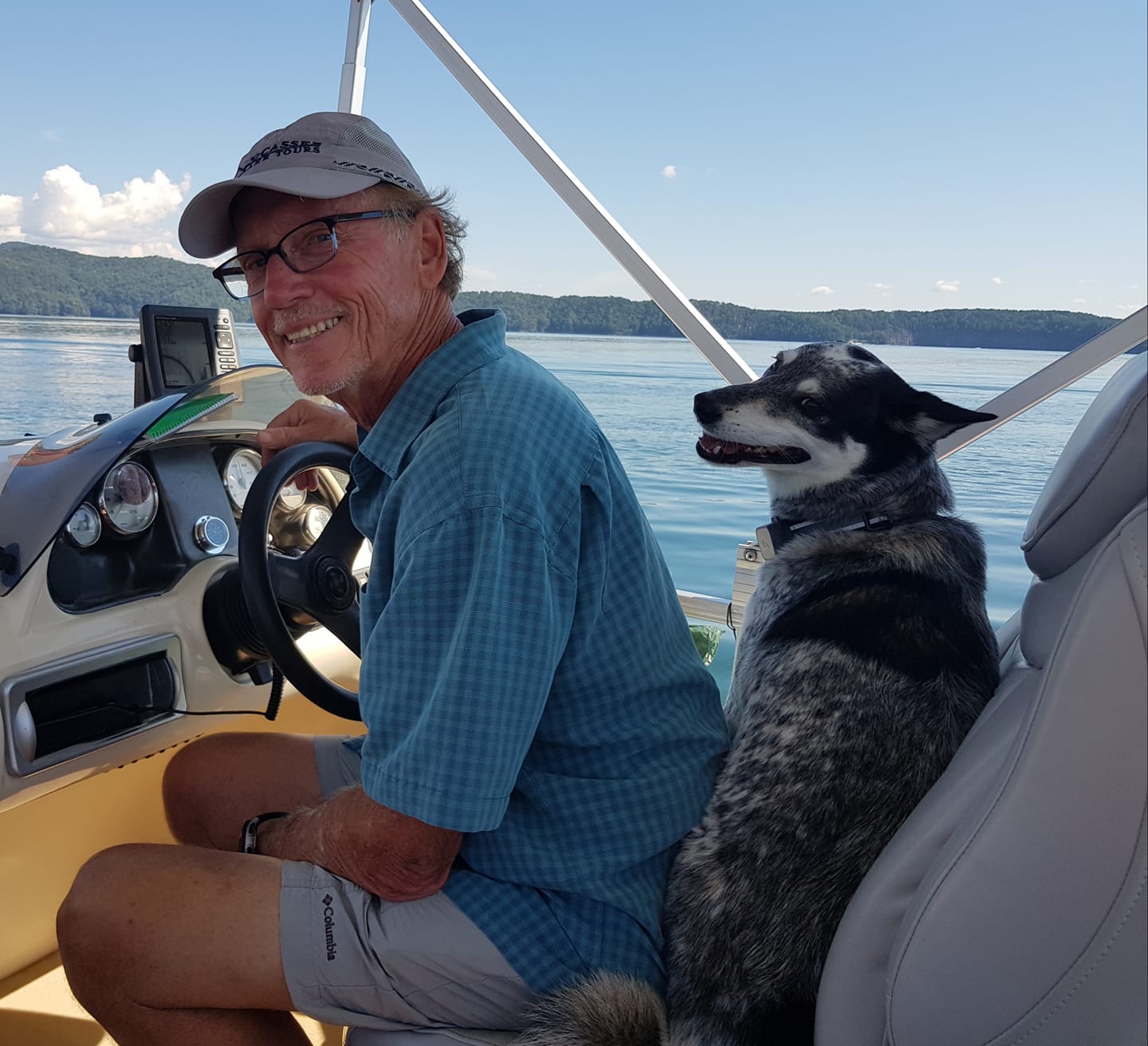 I’d had enough. Twenty years on a Florida barrier island. Hurricanes, hurricanes, and more hurricanes. The bridge to the island even got blown out once. Did I mention sharks? Plenty of them, and their feeding time happened to coincide with my favorite swimming times: at night, in the early morning, or late in the day. And alligators. Not on a barrier island, you say? They don’t swim in salt water? Well, I’m here to tell you that alligators swim in fresh water, in sewer water, in chlorinated swimming pool water, and, in the summer, in salt water. They’ll come right up on the beach, just when you’re ready for bikinis and such. A real mood killer, those alligators. To save the meanest for last, there are cotton-mouthed moccasins. Everywhere. Under your house, on the trails through the woods, just waiting for you when you get out of your kayak to stretch your legs. But it’s the August humidity that usually drives Florida crackers to the mountains every summer.

Coming from Florida to Upstate South Carolina is like moving from Mars to Earth, so I enrolled in the Clemson Upstate Master Naturalist program, to begin what will surely be a life-long learning process to understand this amazing natural world of Lake Jocassee and the Jocassee Gorges. Kay has since completed the program as well, but as a native North Carolinian, she knew way more than me to begin with. When it comes to plants, to flowers, to trees, she’s got me whipped, but I’ve got her over a barrel when it comes to geology, to birds, to the climate. I intend to keep it that way. Otherwise she’d be a mess to live with. It has become quite a pleasure for me to be an occasional writer about our area in both the South Carolina Wildlife Magazine and the Jocassee Journal. Lastly, I must admit that I live to swim, and Lake Jocassee is the most sublime swimming experience I have ever enjoyed. You can take the boy out of Florida, but you just can’t get the boy out of the water!

* And since Kay’s won’t mention it, I should tell you that she is an extraordinary garden writer. In Florida, she wrote a regular column for two newspapers. Since moving to the shores of Lake Jocassee, she has been the garden columnist for the Sentinel, the bi-monthly publication for FOLKS (Friends of Lake Keowee). Lastly, she has recently penned her first children’s book, ‘Tales from a Tree’. The narrator is an oak tree. Imagine that. 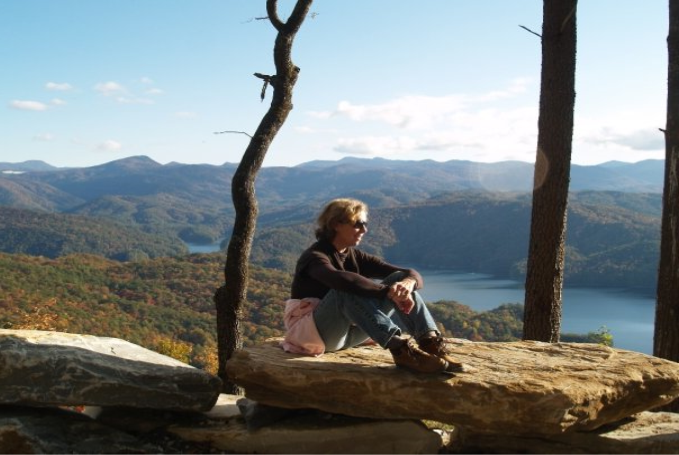 Me? Why, I’m just happy to be here, introducing new friends to this special place we call the Jocassee Gorges.

I first found home in the southern Blue Ridge mountains as a young adult. Here, at the base of the southern Blue Ridge escarpment, I feel whole. Here, rhododendron and mountain laurel, doghobble and trillium, and even the dying hemlocks are my old, familiar friends.  “You know us,” they whisper, “but there is so much more to learn.” There is, indeed so much more to understand about the relationships in nature -- relationships between rocks and trees and fungus and fish and weather and mountains – and how that invisible thread links us all together. The Jocassee Gorges provides a classroom which allows for infinite lessons.

Oh, the bio. Brooks, my dear husband, says it should say something about me. For much of my life I worked as a professional gardener and wrote environmental gardening columns. I’ve worked in more beautiful community and private gardens than I can count. I am passionate about clean water, clean air, and clean food.

Enough about me. You are here for the lake. Allow Brooks and me to share our experience on this lovely mountain lake with you and your family and friends. We will do our best to show you a good time, and have you leave a little piece of your heart with Lake Jocassee. 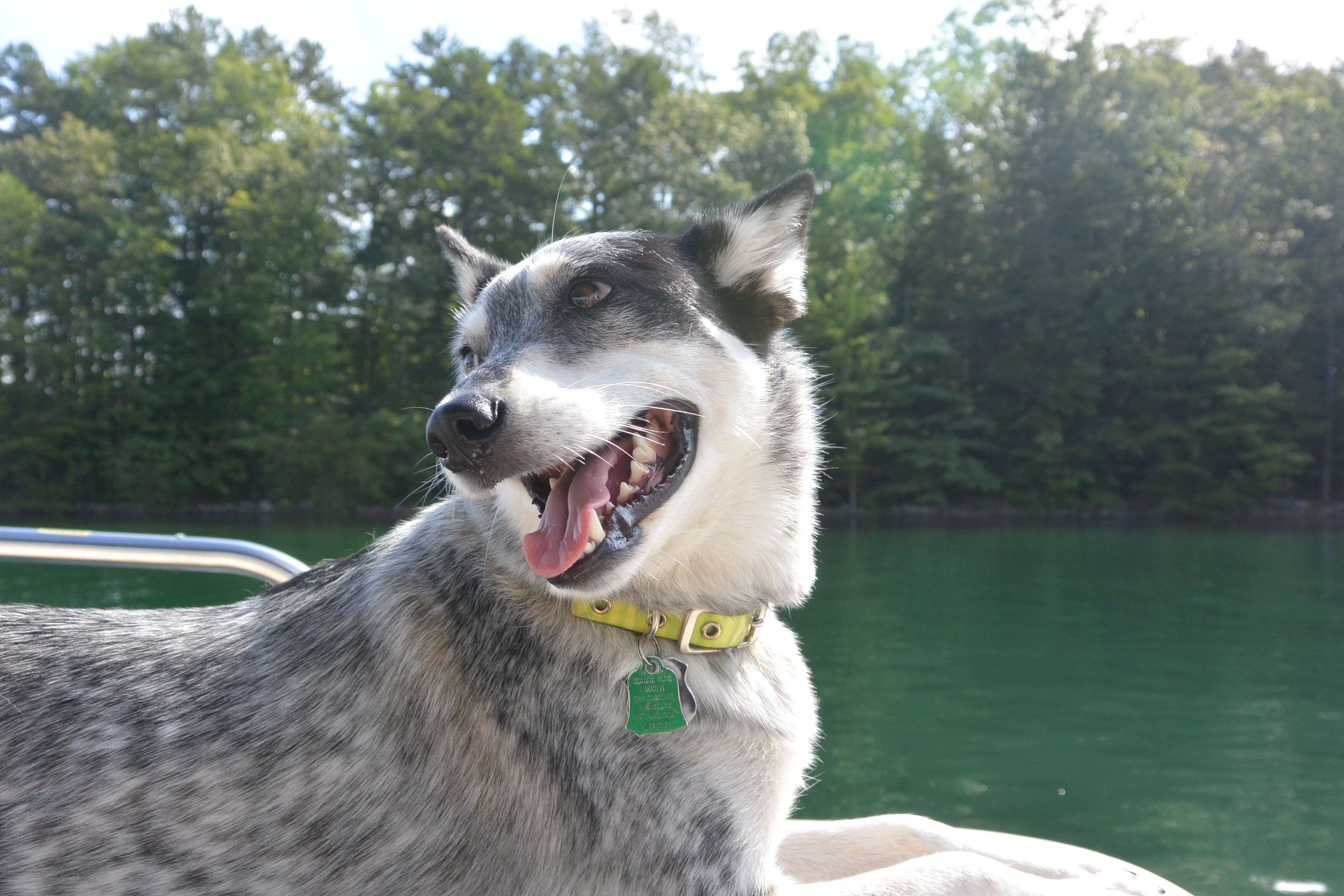 Mica is the Official Ship’s Dog of Jocassee Lake Tours. She is an astute watcher-of-wildlife, often positioning herself across the armrest at the front of the boat so she will be the first to see whatever is moving… whether that might be loons, deer, squirrels, bears, or butterflies. She loves to swim, dog-paddling around to check on everyone in the group, and she is famous for ‘diving’ off low rocks around the shoreline. By the end of a Jocassee Lake Tour, Mica just might be your new best friend. 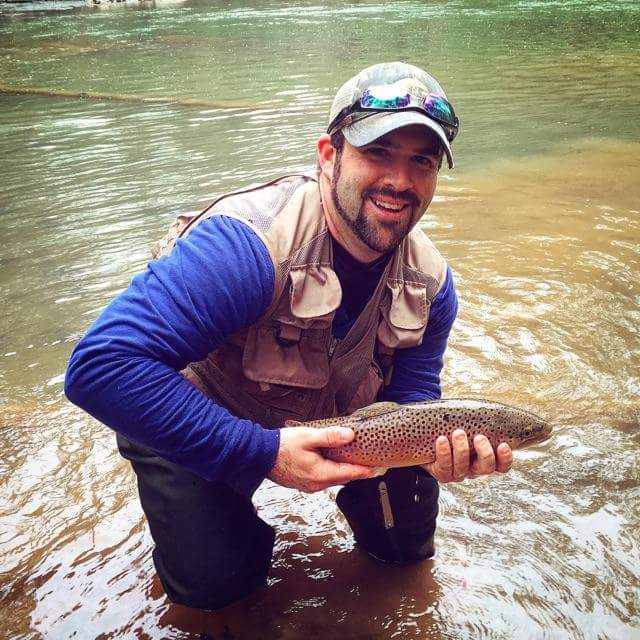 Zach grew up the in the Upstate of South Carolina, but left home to earn his Bachelor's Degree in Business Administration at the University of Pikeville in Kentucky.  After graduating, he returned to the Upstate and managed two small, locally owned businesses. After several years of office work, he realized that working inside was not his calling. Eventually Zach found work in the area known as the Blue Ridge Escarpment, an area where he had grown up fishing, hunting and enjoying the outdoors. Whenever he is not shuttling hikers or working alongside the guides with Jocassee Lake Tours, you can most likely find him on a river or lake doing what he loves most:  hunting, fishing, and enjoying virtually everything to be found outdoors in nature.

Tricia Kyzer has been a naturalist all her life. She grew up in south Florida, happily immersed in waters full of island mangroves and coral reefs, swimming with barracudas and chasing iguanas. As a child, she discovered the temperate forests, alive with deer and meadows full of butterflies, during a year in northern Michigan.

In 1999 Tricia discovered her calling as an educator. She has volunteered with the Discover Carolina program at Jones Gap State Park. and taught science classes to elementary through high school students. In 2012, Tricia became a certified Master Naturalist.
Currently, she serves as an educator at Lake Conestee Nature Park, bringing thousands of school children into forest, meadow and swamp to make discoveries with her, Tricia still finds herself in wonder of mountain coves full of botanical treasures and alive with forest creatures, and she enthusiastically shares these treasures with anyone who will join her.

Dan Whitten is a naturalist living in the Spartanburg County since 1980. He graduated from Auburn University with a BS degree in Wildlife Management. He retired from Michelin North America after 30 years and began to renew his study of nature by taking the Upstate Master Naturalist Class in 2008 and the Catawba Master Naturalist Class in 2010, and the Low Country Master Naturalist class in 2016. He became a SC state certified naturalist in 2014. He serves on the boards of the SC Native Plant Society, Foothills Trail Conference, Friends of Jocassee, and the Tyger River Foundation. Dan presently serves as the president of the Upstate Chapter of the SC Native Plant Society. 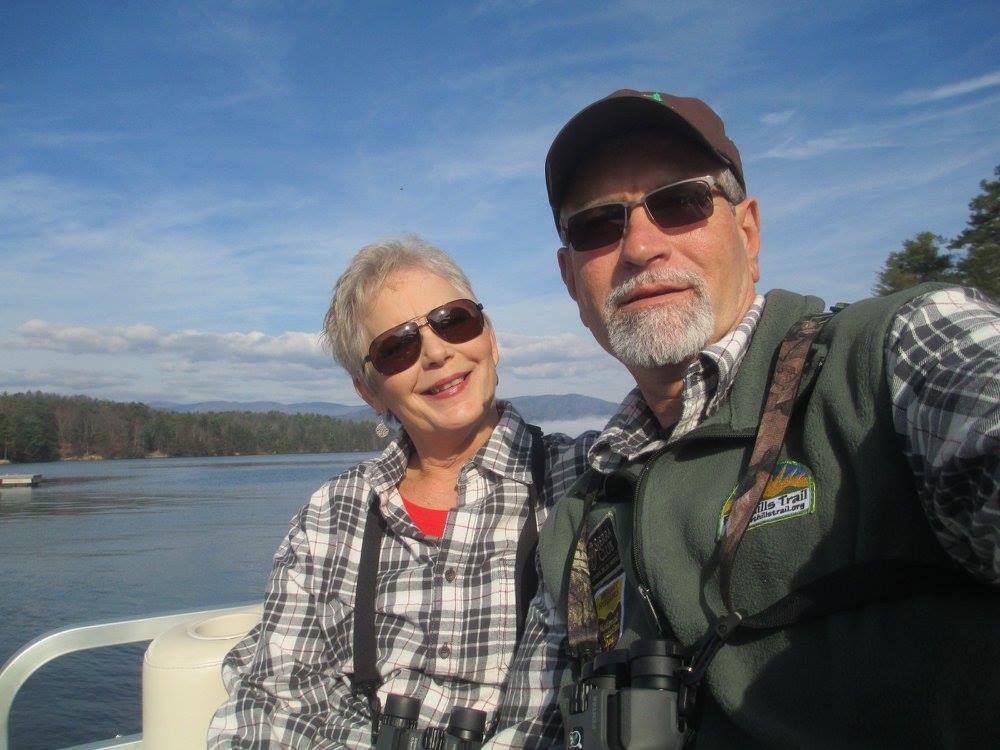 Kenny Brower, also known as Pepaw, to his wonderful grandchildren is a retired "Lab Rat" who spent 30 years in Polymer Science. Now, he is free to roam the wild places so dear to his heart. Married to his sweetheart, Kim in 1979, they enjoy camping from the hills of Virginia to the Carolina shores. Kenny has had a lifelong love for the natural world. He completed the Upstate Master Naturalist program in 2017 and is a member of Friends of Jocassee and The Foothills Trail Conservancy. 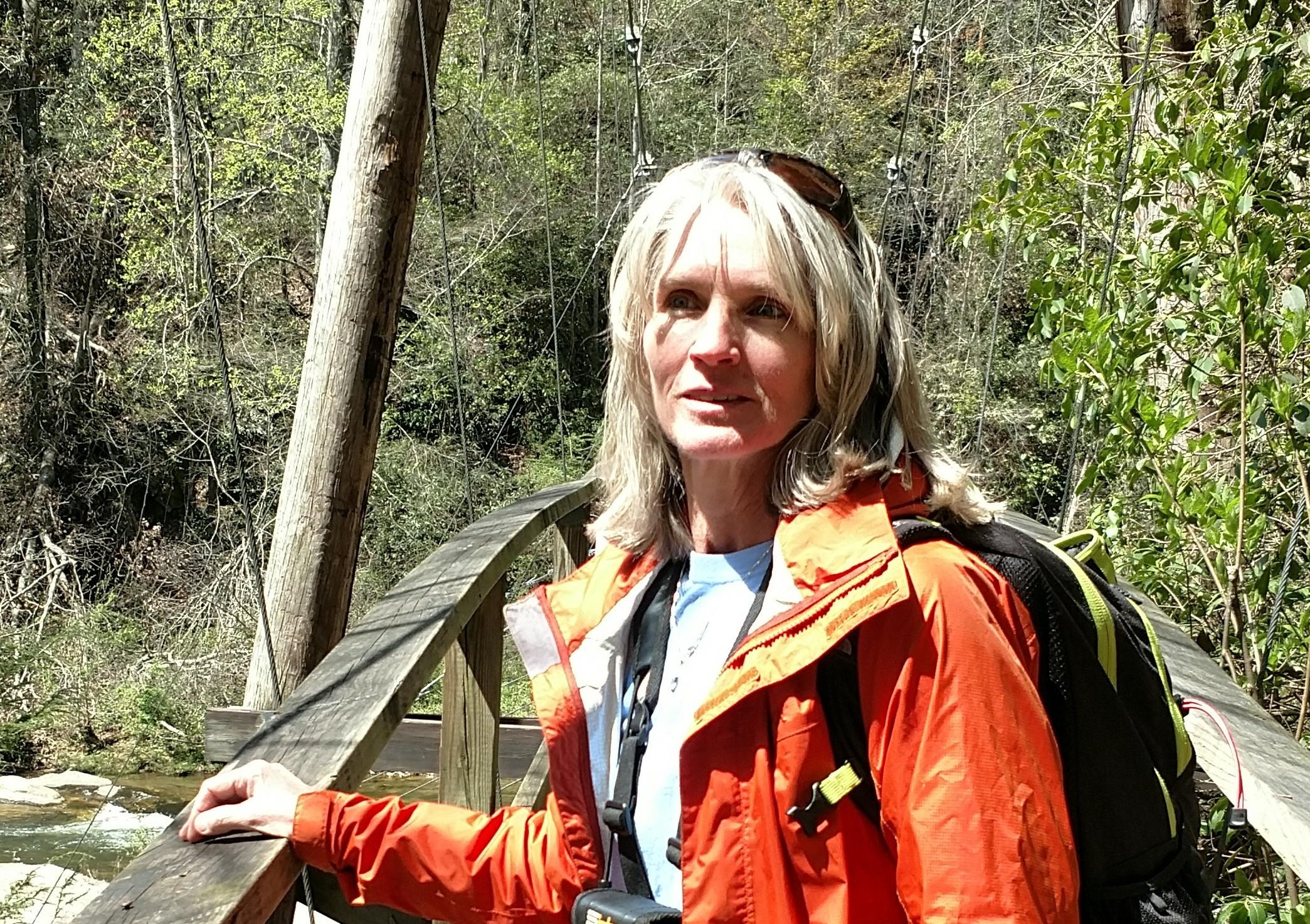 Sheryl is a native of Oconee County, SC, and her ancestors are among the earliest settlers of the area surrounding Lake Jocassee. Her father was a Duke Power employee who worked on construction of Oconee Nuclear Station before moving the family to North Carolina in 1972. Some of Sheryl’s earliest memories are of starry nights camping along the Chattooga river at Burrell’s Ford campground, swimming in the clear, cold mountain lakes during the summer, and spending most of her time outside.  College, raising kids, and work occupied her until her children fledged the nest and started their own journeys, and then Sheryl returned to Oconee County to be closer to her parents. You may have seen her around Chattooga Belle Farm, where she works part time at the farm store, or you may recognize her from her previous job at Head-Lee Nursery. In 2015, she completed the Upstate Master Naturalist program. Sheryl is also a SC Adopt-A-Stream volunteer and regularly monitors two local streams.  Currently, she and her mother live in Tamassee Valley, at the base of one of the first wagon trails to climb into the southern Blue Ridge Mountains.

Ric Barnett is a native South Carolinian who was raised in the Upstate near Greenville, He currently lives on the land where he grew up, so for over 60 years he has watched natural succession transform the landscape. As a young boy, his father brought him to swim in the Keowee River before Jocassee Valley was flooded.  (A slight pall was put over that trip, however, when his father, trying to impress the lad regarding the great change that was about to take place when the lake covered the valley, told little Ricky, “This is a very historical place." To which the boy replied, "I don't see nothing funny about that."  Sigh.....

Ric graduated from Clemson University with a degree in Recreation and Parks Administration and a commission in the United States Air Force.  For a brief period after graduating and before entering the military Ric worked for Duke Power on the Jocassee project. He helped get the last two hydro electric generators on line and conducted environmental survey work for the Bad Creek project.

For 20+ years Ric flew fighters and taught survival skills for the USAF, a mission which took him all over the world. He finished his military career in Alaska and spent the next 18 years as a resident of North Pole, Alaska, where he also flew search and rescue missions with the Civil Air Patrol throughout "The Great Land.' As a global traveler Ric says, “All things considered, I have never seen a finer lake than Lake Jocassee.

Ric is a South Carolina Master Naturalist who shares his love of the natural world with everyone who has an interest in what is going on around them. He also volunteers as an environmental instructor at Paris Mountain State Park, where he teaches 2nd and 5th grade classes.